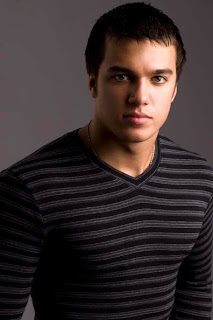 First, before you start reading, everyone needs to go and donate at least $1 to Chris' KickStarter to help fund his latest movie!  I already donated!  Click HERE! 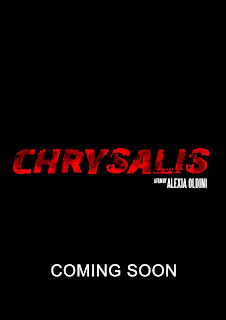 I recently had the chance to catch up with Chris through email, twitter, and phone...  He is a very busy man.... Here is our conversation:
﻿
TeeJay:  How are the pups doing? (Stella & Tucci)
Chris Riggi: The dogs are great, they are upstate with the family, too much going on right now to have them here.

TJ:  I was just looking at your IMDB and when do you have time to breathe?
CR: I Don't!

TJ:  What is going on with Police State?
CR: I am close to finishing "Police State" which is roller coaster ride. The director is trying to make me the next Tom Cruise, which is impossible but FUN. I went to the hospital a few times due to doing my own stunt work. One stunt brought me to the eye doctor with two scratched cornias, from a botched explosion. I also got blown back from the same explosion and missed the crash pad nearly breaking my arm, luckily no permanent damage. But the scene looks amazing! I also got to work with Sean Young (Blade Runner and Ace Ventura) which was really cool.

TJ: I cant wait for Police State... How much longer until we can see it? The Next Tom Cruise huh? I'd buy that.... as much as you are working... I think you can pass him. Be careful doing those stunts!

What is the plot of Police State? I have an idea but I think it would sound better coming from you.
CR:  Police State is an action/adventure film centered around my character as he tries to protect the love of his life from unknown terrorist attacks in New York City.

TJ:  On IMDB.com I see you have a credit on Wolf of Wallstreet, how was that? (releases in 2013)
CR: I got to work for 3 days on "Wolf of Wallstreet" and had a few lines, mostly improv. But I got to audition for and meet Marty S (Martin Scorsece) and the crew which was intense. Leo (Leonardo DiCaprio) is probably who I would want to model my career after. He is a role model for young actors. He had this monologue where his character is shouting at a crowd of coworkers and he went all out the entire time, never pulling back. He was out of breath and on the floor after each take. And let me tell you, that guy is awesome to see up close. I learned so much from watching him work. He really deserves a break from all this noise.

*FYI* Wolf of Wallstreet has a huge and talented cast, including but not limited to: Martin Scorsece, Leonardo DiCaprio, Matthew McConaughey, Jonah Hill, John Favreau, and of course Chris Riggi amonh many others!

TJ:  What has been some of the best advice you have gotten from fellow actors/artists?
CR:  Best advice I got was from Jonah Hill, "stay single" ha.

TJ:  You are really busy right now with multiple movies, pilots, etc... I'm guessing you don't have any downtime.
CR: Right now its pilot season and I am keeping myself busy with 5 different characters at once, its a mess. But I am staying sane by writing my own material.
Right now, I have an unfinished screenplay called "Cake" that I am writing and would like to direct someday, Ed Burns has been a huge help, inspiration wise. The short film I directed: "Bazaaro" is somewhat done and up on youtube, its a rough cut.  I have a few movies in post and pre-production and a possible TV pilot called "Promo Life" in the works.

TJ: So how did you like being behind the camera on bazaaro (and infront of it), was it harder to direct yourself or the other actors?
CR:  I have never wanted to just act, so many actors JUST act. I respect that, but I cannot be one of them. I respect people like Ed Burns, he is a role model for me. ﻿
TJ: From your KickStarter Link, I see you are working on a movie called Chrisalis, What is it about?
CR: I am super excited to talk to you about my next project "Chrysalis".
John Faughnan (winner best writer *Boston Film Festival for "To Redemption"http://www.imdb.com/title/tt2091459/) has crafted yet another dark drama to be directed by his wife Alexia Oldini. Heres the trailer for "To Redemption".

Its a story based on true events: two cousins who believe they can become famous by killing an entire family (the judge who put my character away being the father). These two characters film the carnage and death...without the use of guns. A lot of the footage will be shot with the combination of iphones, flip cams and GoPro cameras.
These are the darkest characters I have ever read. I plan on taking on a Christian Bale type transformation (The Fighter,Machinist and Rescue Dawn, eating clean, vegetarian food, juices and a lot of cardio. We start rehearsing and creating a KICKSTARTER next week to raise money, a purposed budget of around $9,000 (smallest feature budget I have worked on).
This is a bare bones production consisting of myself, John, Alexia (who is the director and DP) and a few techies on set. There are only 3 other actors besides John and I. This is a gritty, in your face indie thriller that will leave its audience shocked.
TJ: Is $9000 enough?  Is that enough to get equipment, food, editing costs, etc....
CR: Having a bigger budget can create certain problems especially when the people who gave you that $1 million want to add their creative input. Raising the money ourselves will allow us creative control.
TJ: Chrysalis sounds really dark and I am immedietely drawn to it. You are playing one of the cousins that kill, right? Everything I have seen you in is totally the oppposite (except for bazaaro... you were pretty intense in that). How hard was it to go dark?
CR: Yes, I am playing one of the cousins that kill the whole family. I am going in the opposite direction of "nice". I made a promise to myself when I was in school that I would not settle and I would push myself as far as I could go for this craft. I have NOT done that, I have settled and I have picked up bad habits along the way. Recently I am working very hard to correct those habits . My goal is to move the audience and make them feel. That is why I need to drop weight and look like garbage for "Chrysalis", even though its an art house, zero budget project, I need to push this thing as far as it can go. And the filmmakers believe in me, oddly enough. I should be fighting for the high profile, high paying jobs but right now I am just trying to do good work. The creative team behind "Chrysalis" have told me to "stop doing cute work Chris!!!", I am trying to listen.
TJ: You are playing so many different characters right now, how do you keep them all seperate?
CR: We have to find a way to let them all go. Its not an easy career, but neither is anything else if your going to be good at it. This "Chrysalis" film is very moving and dark, I would be lying if I told you that I was not walking around NYC with a few deranged thoughts here and there.
TJ:  Wow Chris, you are an extremely busy man and I wish you the best of Luck in all of your endeavors AND with Chrysalis....
GO SUPPORT IT TODAY! Click HERE to Donate!

*Update.... Chrysalis was fully funded BUT a deadbead donor pulled out and now we need to raise over $1000 all over again.... please... if you can spare $1 it would make a difference!
For the latest news on Chris and Chrysalis, make sure your follow @ChrisRiggi and @TeeJayToday on Twitter!

Find TeeJay Today on facebook  www.facebook.com/teejaytoday
Posted by SeekerBug at 12:59 PM No comments:

Watched 3 more movies while waiting to get the okay for an upcoming interview!!!!

Men in Black 3
I like how it referenced the other movies... you don't get that often in a sequel.  Is it a great movie...no... but it is a GOOD movie.  It's worth buying if you see it on the clearance rack or on sale.  I just wished I could have seen more of Tommy Lee Jones, to me, he is the main character.  Josh Brolin and Will Smith play 2nd fiddle to Tommy!  LOL!

Pitch Perfect
It starts off slow (first 2o minutes or so) but then it is just hilarious!  I was watching this by myself and laughing out loud at some of it.  I am definitely going to buy this movie and watch it every so often to pick up my mood!  It also helps that the leading lady is not hard on the eyes if you know what I mean.  The songs in this movie also had me singing along because they were RELEVANT to today!

Cold Light of Day
Bruce Willis... what happened?  This is not his best movie, but I watched it because it has my new favorite actor of the moment in it.  Henry Cavill (Superman later this year)  Save your money unless you just want to see Henry with his shirt off.  Bonus points for having Sigourney Weaver in it!

Posted by SeekerBug at 2:34 PM No comments: